The commercial roof recover at Roma High School in Roma, Texas, was a long time coming. Leaks at various transition points were causing excessive damage. Ultimately, the school district decided to invest in a major renovation, which ended up including new metal roofing, new low slope roofing, repairs to masonry and metal walls, as well as the replacement of windows and skylights. 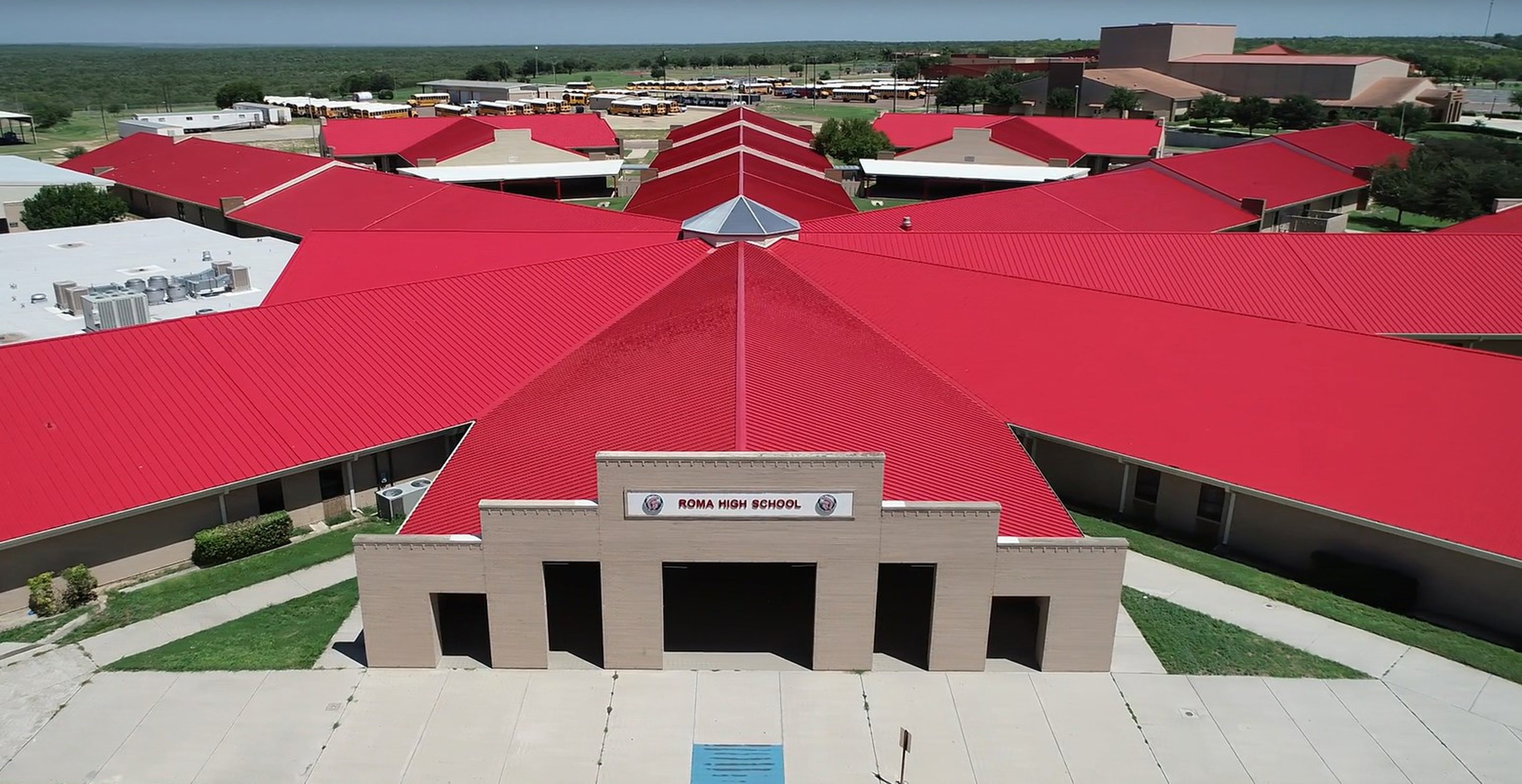 According to a report put together by the school district, the water infiltration issues were considerably worse than anyone realized. Most of the leaks were associated with walls and transitions between roofing and walls as well as the foundation and the walls.

To ensure history did not repeat itself, Amtech Solutions of Pharr, Texas, investigated thoroughly and recommended the best solutions, including designed leak-proof “saddles” where the roof and walls met.

“When we got involved, they were unsure of what the real causes of all the problems were,” says Mike Hovar, AIA, RRO, LEED AP, of Amtech Solutions. “When you see water running down the wall, immediately you think the problems were only with the roofing. Once we got a closer look, it wasn’t just the roof, but the walls, the drainage over the walls. No one had any idea how bad it was.”

How does something like this happen? “The original design contributed to all of the problems and the installation made it all worse,” Hovar says.

Amtech is a full-service design and restoration consulting firm, offering architectural, engineering and building envelope expertise. Hovar says from the start, there was a contingent that wanted to go with the tile roof again to maintain the original design intent, but another group simply wanted a solution that would eliminate any repeating problems moving forward.

“Both systems would be appropriate, installed correctly,” Hovar says. “We talked about the advantages of metal as opposed to tile, how it would be easier to get a properly functioning roof and that it would be less expensive. It’s safe to say we helped steer them in that direction.”

Rio Roofing of Harlingen, Texas, roll formed the panels onsite, as they were needed for installation.

“We brought the roll former out on weekends to run panels because it draws a crowd,” says Hedley Hichens, vice president at Rio Roofing. “Obviously with a school there are fewer people around on weekends.

“We also purchased a SnapTable Pro from Swenson Shear to cut panels we installed in the valleys and to notch the panels. We easily got our money’s worth out of that thing on this job alone.”

Hichens says the school board and community were very excited about the project because problems have aggravated the district for the more than 25 years the school existed. The school held an actual “groundbreaking ceremony,” with catered food for guests and a band for entertainment. 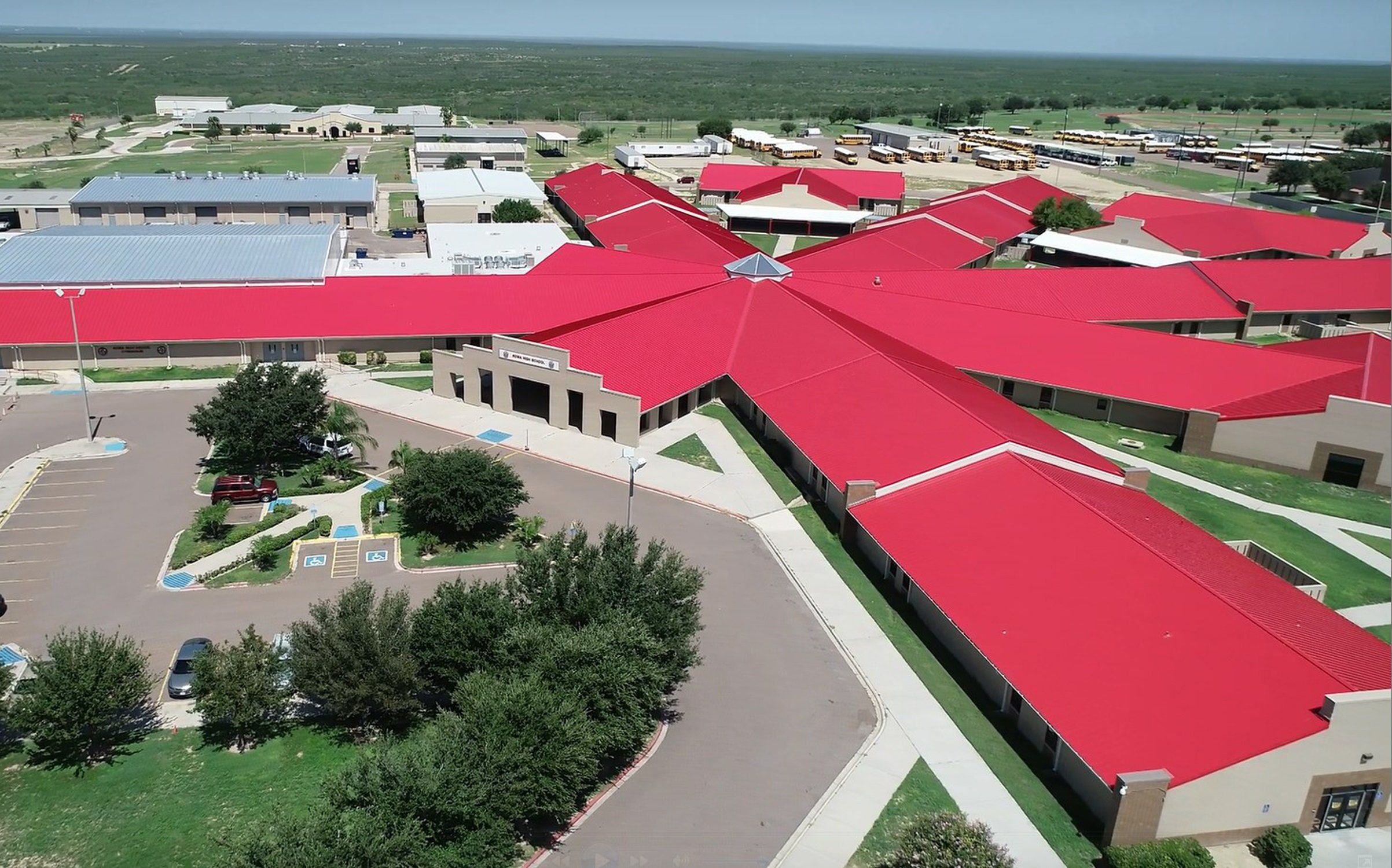 “Because there were a lot of issues to deal with, it really was committing to one detail at a time,” Hichens says. “Amtech designed the details, everything; some things change when you get in the field, but they did a great job of making sure everything was going to work the way it was supposed to.”

Hichens says the 238T symmetrical panels work well with all the details and he likes the way they look when completed. “In the past, we had done a lot of work with 1-1/2-inch mechanical lock and 2-inch double-seamed panels,” he says. “With the 238T, you don’t have to worry about the seamer jumping off; it finishes beautifully.

“We’re in a windstorm area, so the uplift performance sold us on the 238T.”

Amtech specifies 138T and 238T for a lot of large-scale roof recovers.

“Let me count all the ways we prefer to use the 138T and 238T panels,” Hovar says. “First, it’s the easiest panel to design and install complex or simple flashing details, which was a big deal on this job. Second, because the panels are symmetrical, we can start installing panels anywhere on the roof.

“The panels handle better when they’re being carried, they don’t fold over on themselves like other profiles can. Seaming goes faster because you can seam the cap going in either direction. Also, you can replace damaged panels without removing any panels that are not damaged. And flashing with curbs is a dream!”

How to Retrofit a Flat Roof with Metal