While metal roofs can offer a remarkable 60-year service life, they can still require replacement.  In some cases, the roof has performed well for decades but is at the end of its service life.

In other situations, repair or replacement may be necessary for reasons ranging from poor design or installation of the original roofing system to extensive storm damage or even major building modifications. 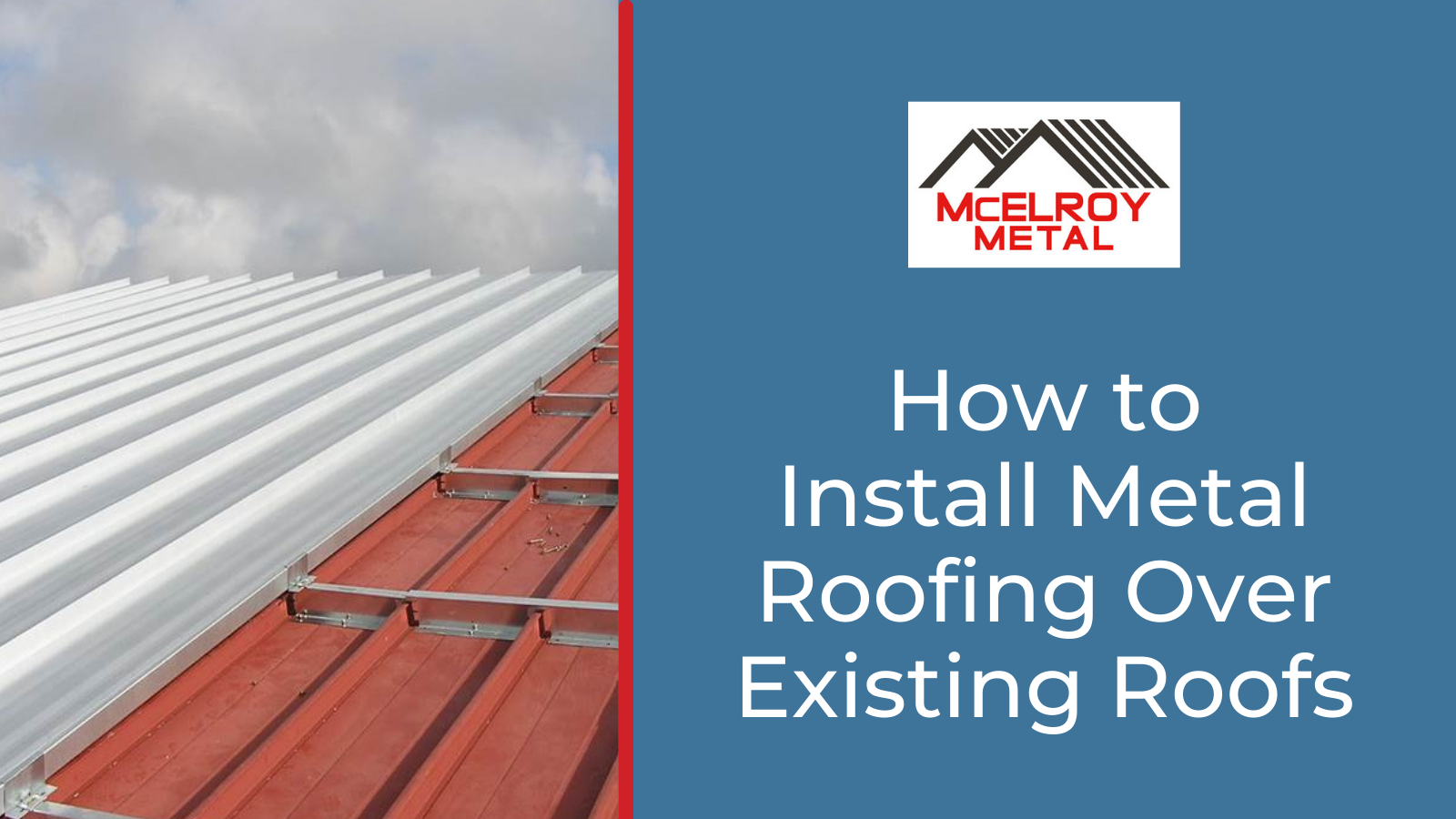 Historically, when the need for metal roof replacement occurred, the most common approach was remove and replace.  Much as the name implies, this method involves completely removing the original roof and installing new metal panels back onto the original structure.

While this approach remains feasible, tear-off and disposal costs make this option less attractive than some newer remediation approaches such as recover.  By definition, a recover system means that the existing metal roof remains in place and is simply covered with new metal panels.

In addition to saving the cost of removing the original panels, recover methods continue to gain popularity because the building occupants, machinery, and inventory remain protected from the elements during the roof replacement process.

Additionally, where the old-style remove and replace approach often forced relocation of operations, recover methods involve minimal (if any) disruption to the building occupants.

Another benefit of recover systems is that they are considered a roof alteration and consequently are exempt from IECC (International Energy Conservation Code) roof replacement requirements.  While that may sound like a slight nuance, the implications are significant.

According to the IEEC regulations, roof replacement requires bringing the building to current insulation requirements. Yet the IEEC issues no expected standards for the addition of insulation for recover projects. This difference in insulation product and installation costs can significantly affect the total project cost.

For these reasons, recover continues to gain favor as the preferred approach when replacing an existing metal roof.

Once you’ve decided to approach the project as a recover (instead of remove and replace), building owners, designers, and contractors can choose between several popular methods as outlined below:

The options in the “with framing” category involve building a structure on top of the existing roof.  This structure is attached to the existing structure and then used to attach the new metal roof panels.  In contrast, the “frameless” approach involves no additional framing.  As you might expect, each of the options above offers advantages, disadvantages, and even limitations.

For example, given their design, frame style recovers can use a variety of different panel styles ranging from exposed fastener to concealed or standing seam systems. Conversely, panel options are limited when using frameless-style systems.  Let’s explore each system type in-depth, starting with the frame-type systems.

A notched purlin approach involves installing rows of purlins in between the flat portion of the existing panels across the width of the roof.  While purlins can be field modified to create the necessary notch, factory-produced products are also available, such as Roof HuggerⓇ.  While products like Roof Hugger are more expensive than normal purlins, they offer considerable labor savings to offset the price difference.  Retrofit purlins can be used to recover existing exposed fastener roofs as well as low and high floating standing seam roofs that are installed on open framing, including purlins, hot roll channels, or hat sections. This approach should not be used to recover existing roofs installed over bar joists, wood decks, or metal decks with rigid insulation. 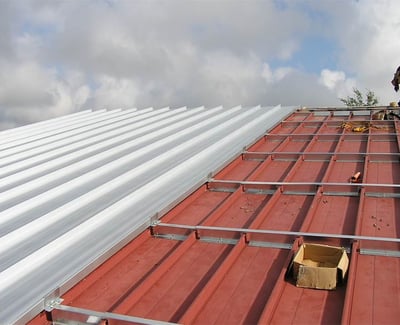 As the name implies, the hat over zee clip method involves attaching a Zee clip through the flat of the panel into the substructure below.  It’s important to note that the zee clip must be the same height or higher than the major rib of the panel to ensure structural integrity.

After clip installation, a hat section is placed horizontally on top of the zee clips, as shown below. Hat over zee clips can be used to recover existing exposed fasteners as well as low and high floating standing seam roofs that are installed on open framing, including purlins, hot roll channels, hat sections, or bar joists.

This approach should not be used to recover existing roofs installed over wood decks or metal decks with rigid insulation. 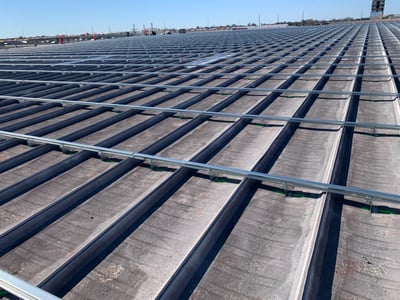 Criss-cross grid systems involve installing two layers of red iron onto the existing roof.  One runs from eave to ridge and the other from rake to rake on the building.  Criss-cross grid systems are most common when the current frame spacing is too wide to accommodate the roof panel. Consequently, buildings with frame spacing over 6’ on-center are typical applications for this approach.  Grid systems are used to recover existing exposed fastener panels as well as low and high floating standing seam roofs that are installed on open framing, including purlins, hot roll channels, hat sections, or bar joists. 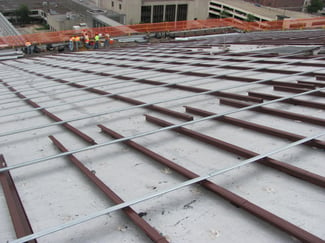 The addressed methods represent the most common “framed” options for recover projects.  Let’s now shift our attention to some “frameless” options.

Infill with Rigid Insulation-Long Fasteners Back to Structure

Infilling the existing roof with rigid insulation, then using another layer of rigid insulation or a cover board is an excellent recover method. The most significant advantages of this approach are that the roof can be made watertight with ice and water shield quickly, and the insulation can be made continuous.

Clips are placed on bearing plates once the roof is dried in; then, long screws attach the new roof to the original purlins.  Since this approach doesn’t involve any additional framing, it’s important to note that the panel selected must meet the uplift requirements on the existing frame spacing. 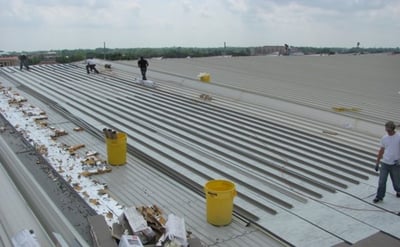 Our frameless 238T Metal-Over-Metal Recover System is our contractor customer's favorite recover solution for existing metal roofs that need to be repaired or replaced. This roof recover system is commonly used over existing thru-fastened panels. The frameless design offers significantly reduced material and labor costs, allowing contractors to provide this option at a price level competitive with single-ply roofing while lasting nearly twice as long. 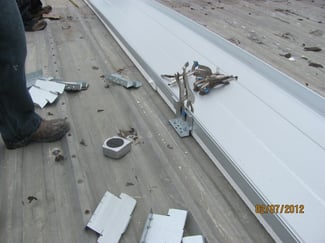 Ready to learn more about ways to approach and considerations for installing a metal roof over an existing metal roof?

How to Retrofit a Flat Roof with Metal