Some roofers are simply cut out to do their thing in the spotlight. Empire Roofing of Austin, Texas, executed the removal of an existing leaking stainless-steel metal roof and the installation of McElroy Metal’s 238T symmetrical copper standing seam roofing system on a historic centerpiece building on the campus of Sam Houston State University.

Historic Austin Hall in Huntsville, Texas, was reroofed less than 10 years ago. It’s the oldest building west of the Mississippi River to have been used continuously by an educational institution. Austin Hall was first occupied in October 1851 and completed the following year. 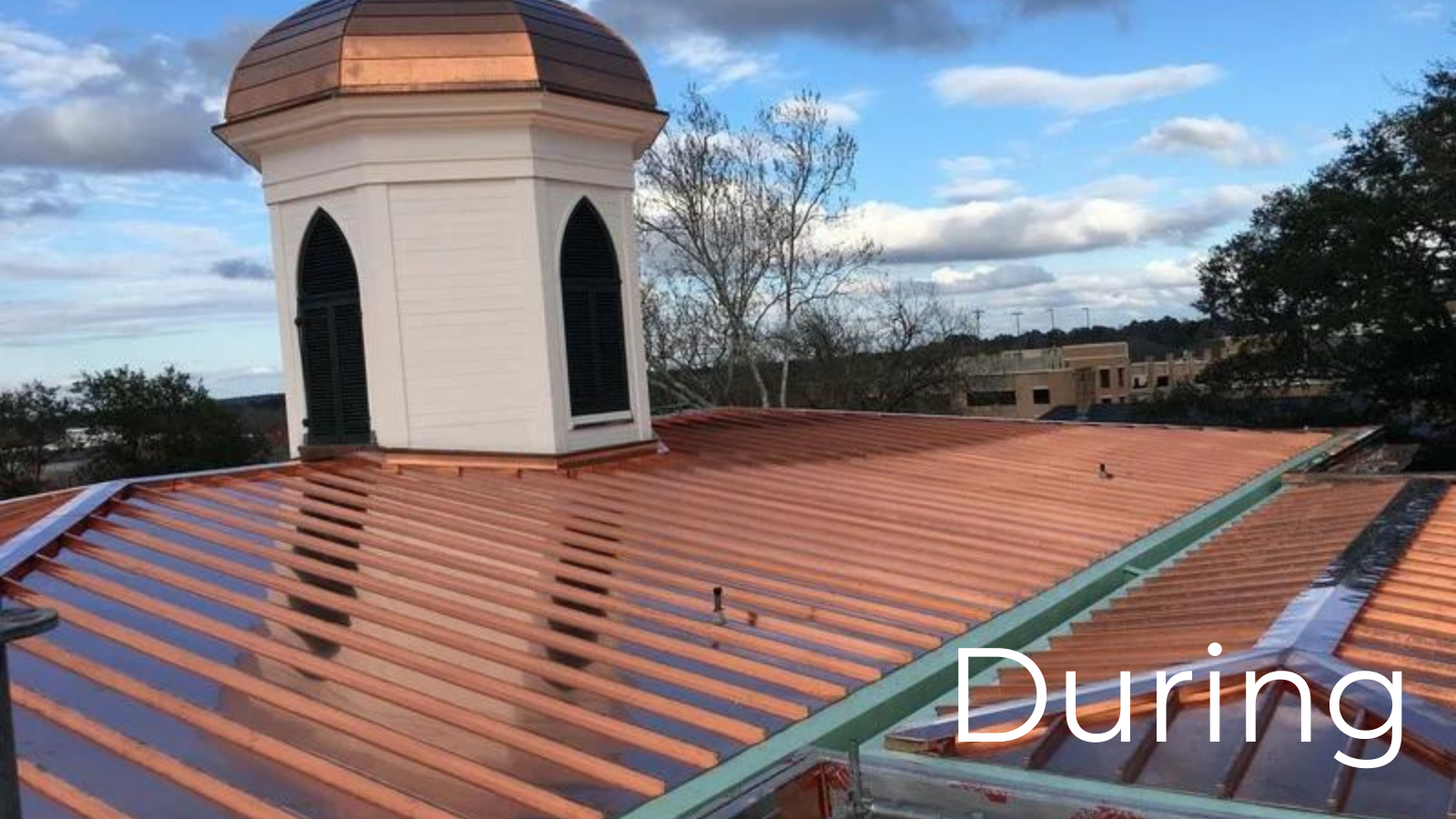 Unfortunately, it soon became evident that there were defects pertaining to the 2009-10 roof installation and it needed to be replaced. The stainless-steel interlocking panels were not seamed or soldered as specified and in accordance with historically accurate methods, resulting in wide-spread water infiltration beneath the metal roof assembly. Armko Industries of Austin was contracted to determine the best plan of action for resolving these issues and restoring the Austin Hall roof, internal gutters, and cupola back to a watertight condition. During the evaluation, portions of the existing roof were needing to be removed to verify conditions. Sam Houston State and Armko requested Empire Roofing assist with the evaluation.

“Based on my initial observations, I was hired to come in and actually remove and replace some of the roof near the cupola and internal gutters to assess and verify the exact nature of the perceived defects,” says Aaron Todd, who leads the metal roofing and sheet metal division at Empire Austin. “I hated to be the bearer of bad news, but it was a lot worse than they anticipated. The flat-seam panels were installed using a Pittsburgh seam, which really isn’t designed to be a watertight seam in a low-slope (2:12) roofing application. The underlayment that was installed did a better job of keeping out water than the flat-seamed panels.”

Working together, Empire and Armko put together a plan that required the removal of the stainless-steel flat-seamed panels and the internal gutter liner. The Texas Historical Commission was involved in the renovation to ensure the new roof would be as historically accurate as possible. Plans and specifications issued by Armko Industries were to remove the existing stainless steel and to reroof with the 20-ounce copper 238T standing seam on all roof sections, interior gutters, and related sheet metal components. Specifications and details issued siding removed at the cupola walls and a new liquid-applied waterproofing membrane was applied over the new sheathing, with new siding installed to match the original siding. At the base of the cupola, the specifications and details called for the installation of thru-wall flashing using 20-ounce copper. Titanium PSU-30 high-temp self-adhering underlayment covered the roofing substrate and was used as a lining in the internal gutters, under the 20-ounce copper.

“We set up scaffolding and worked on the octagonal cupola first,” Todd says. “The design incorporates a convex curvature with all roof sections meeting at the apex. Together with my superintendent, Diego Trevizo, and our lead foreman, Uri Contreras, we measured everything we needed for the cupola roof and gave the cut list to our shop fabricators, who produced the panels and trim for the cupola roofing, the design of which was proposed by Empire and approved by the Texas Historical Commission and Armko. We also had a 10-foot mechanical brake onsite to fabricate and modify any panels as needed during the installation process. My team and I love working with copper because aside from the obvious qualities inherent in its chemical make-up, it allows for a more thorough arsenal of seaming and joining techniques due to its unique malleability relative to most other types of commonly used metal components.”

Todd says standing seams were incorporated at each hip of the cupola to avoid the need to solder vertical joints. At the apex of the cupola, standing seams were folded down and lapped under the finial skirt. The crew sealed/riveted/soldered the finial base to the copper panels to create a watertight and wind-resistant detail in this very exposed and relatively flat area.

Empire Roofing owns roll formers with dies to produce McElroy’s 238T and 138T symmetrical standing seam panels. “Empire’s capabilities with regards to commercial, industrial, and historical roofing projects are far-reaching, and we love a good challenge,” Todd says. “If you’ve got a difficult problem, it’s our job to solve it, and we love working with innovative manufacturers like McElroy in doing so.” 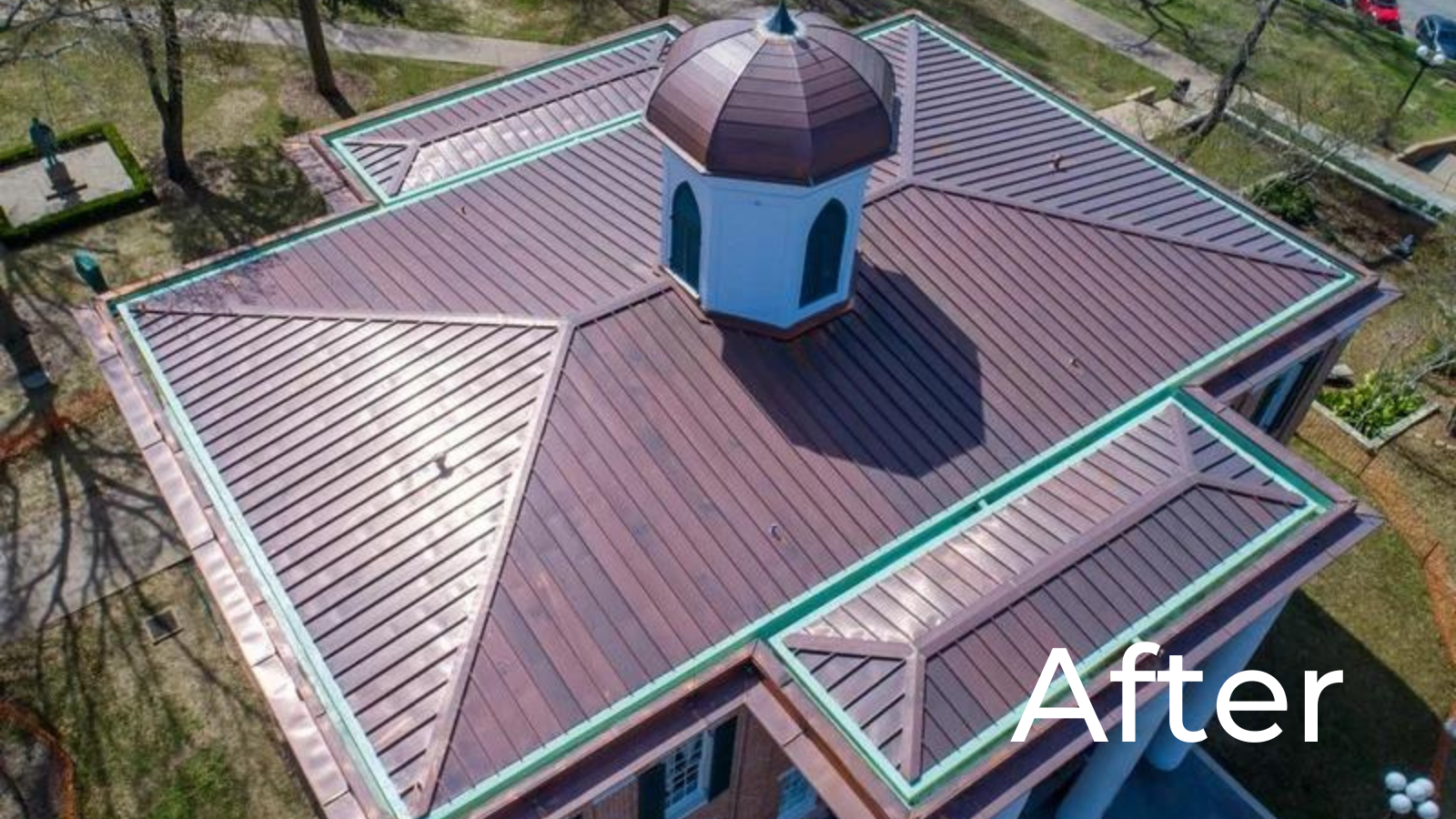 Symmetrical standing seam systems do not have male and female legs but are comprised of panels with matching left and right legs. The panels are joined with a mechanically seamed cap. The panels are non-directional, meaning they can be installed left to right, right to left, or even from the center out. The seam design on a symmetrical panel is more watertight than a double lock because there is no interruption of sealant in the seam at the clip locations. Most importantly, a symmetrical panel can be easily replaced if there is ever damage or a reason to pull a panel out of the roof at a later date.

“Through a judicious use of hydrostatic details utilizing butyl tape in lieu of solder at key areas, we were able to achieve a long-term watertight and wind-resistant roof assembly that only minimally relies on soldered joints and that can accommodate thermal movement much better,” Todd says.

Austin Hall is located on a hill among old-growth trees, so there isn’t much room to park a roll former to produce panels up to 25 feet long. It’s a relatively small project, about 6,000 square feet. “We set up our staging area in the road, about a quarter-mile from Austin Hall,” Todd says. “To minimize disruptions to daily university activities, we decided to run panels in the evening and have 3-4 guys walk the longer panels up the hill, one at a time. We rented a golf cart to transport guys down the hill to the roll former and bring smaller items up to the jobsite. We’ve got a great crew and it was all hands on deck for this one. In one night, we produced all the panels and telescoped them to the roof on our spreader bar, which we attached to the forks of our onsite skytrack. We didn’t damage a single panel … that’s tough to do with copper!”

Todd was sure the roofing details would be watertight and wanted to make sure the internal gutters didn’t cause any problems. The Empire crew used sandpaper to etch the flat 20-ounce copper before it was fabricated into gutters. Once fabricated and roof-loaded, the gutter pieces were joined in 40- to 50-foot sections in the interior gutter, then lifted out and placed on saw horses. All joints and seams were fully soldered on the saw horses and then placed in their respective areas inside the internal gutter troughs, where the few remaining seams were joined and soldered in place. The gutters then were coated with Kemper 2K PUR, a solvent-free, fleece-reinforced, and liquid-applied waterproofing system based in polyurethane resin. Empire used a roller to apply the coating in open areas and brushed on the coating in corners.