BOSSIER CITY, La. August 7, 2015 – Because the show must go on, what served as a canopy-style roof at the Miller Outdoor Theater in Houston needed repairs in short order. Byrne Metals installed more than 18,000 square feet of copper 238T standing seam panels during the 5-month offseason by calling in the roll former from McElroy Metal that runs panels right onto the roof deck. 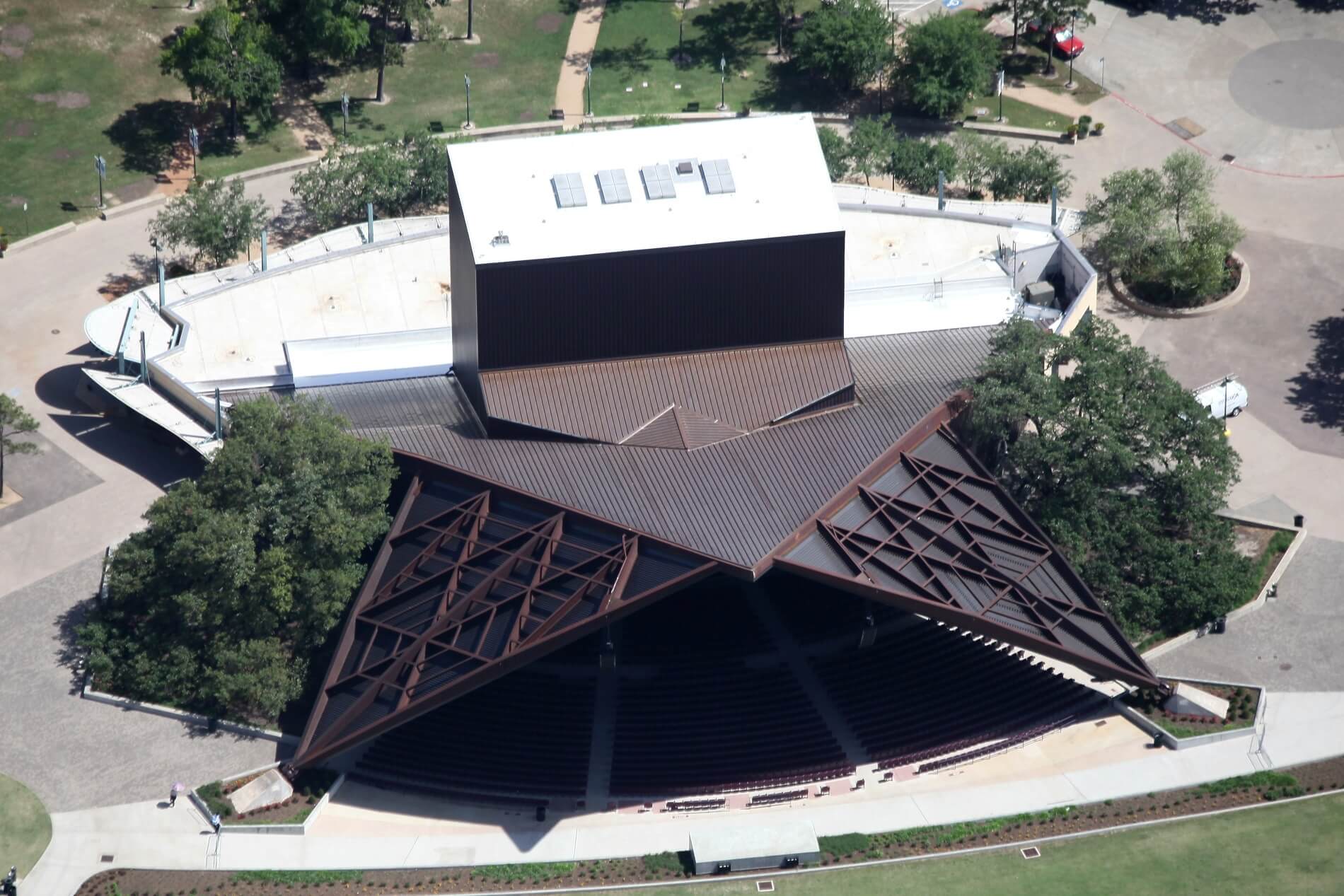 “Everyone else who had tried to fix the problems focused on trying not to change the appearance,” says Karl Schaack, P.E., president of Price Consulting of Houston. “We realized providing a leak-free solution required some change in the appearance. We got a little pushback at first, but when we explained our design, they were just happy to know it wasn’t going to leak anymore.”

“It was a very challenging job,” says Neil Byrne, president of Byrne Metals in Humble, Texas. “This is an iconic structure in Houston, originally built in 1968. At the time, it won several awards for its design.”

Unfortunately, right from the start, the design didn’t hold up against the Texas rains. For more than 40 years, anyone who was hired to fix the problem, failed.

Schaack chose 238T symmetrical panels from McElroy Metal for the project. “It’s rigid and it meets high wind requirements,” he says. “The 238T is symmetrical so if a panel gets damaged, you only have to replace one panel.”

The multi-million dollar renovation in Hermann Park served to correct canopy deficiencies that caused leaks above the stage as well as the audience, putting a real damper on the theater’s cultural and educational event offerings.

Byrne Metals went to work as soon as the 2013 season concluded in early November. Improvements included replacements of the east and west wings, a new soffit for the main sloped roof and the new 20-ounce copper standing seam roof. The profile was McElroy Metal’s 238T symmetrical standing seam panel. “Using copper helped the new roof blend in with the original framework,” Schaack says. “Especially as it ages, it will look great, like it’s been there all along.”

Changes in design to the updated roof, as well as a watertight standing seam installation, will help prevent future leaks.

The roof area between the existing Cor-Ten superstructure was framed with purlins, a metal deck was installed on top of the purlins, then a 1-1/2-inch nail base was installed over the deck along with ice and water shield. A giant reverse-slope diverter was built at the intersection, where the sloping roof connected to the stage wall. Valleys were lowered below the roof plane and there was a slight change in pitch that was overcome by rounding the insulation/plywood over the pitch change.

McElroy Metal’s jobsite production equipment simplified the process of installation and made the jobsite safer. The roll former was hoisted to the eaves on a scissor lift where panels were conveniently run onto the roof. Not only did this method eliminate the need for an expensive crane to get panels on the roof, it was safer as some of the panels were up to 110 feet long. Because of the unique shape of the roof, panels were cut to fit on the roof.

“We specialize in the unique and difficult,” Byrne says. “This is the kind of job we like. We generally have about 20-30 projects under contract at any one time, but this one required a lot of personal attention from our upper management, myself included. We had as many as 30 crewmembers onsite, working 10-hour days and some weekends, when necessary.”

As with all Byrne Metal jobs, safety was a major consideration during the evaluation and installation. “There are three things we consider important to staying in business,” Byrne says. “Safety, quality and productivity. We have a full-time safety person on staff making sure we’re working safely on all jobs. This job required us to take into consideration some other factors like guys working long days, getting fatigued and the speed at which we had to work to complete the job on time. We enjoy a good challenge and Miller Outdoor Theater falls into that category.”

The image below shows the Miller Outdoor Theater before its transformation. 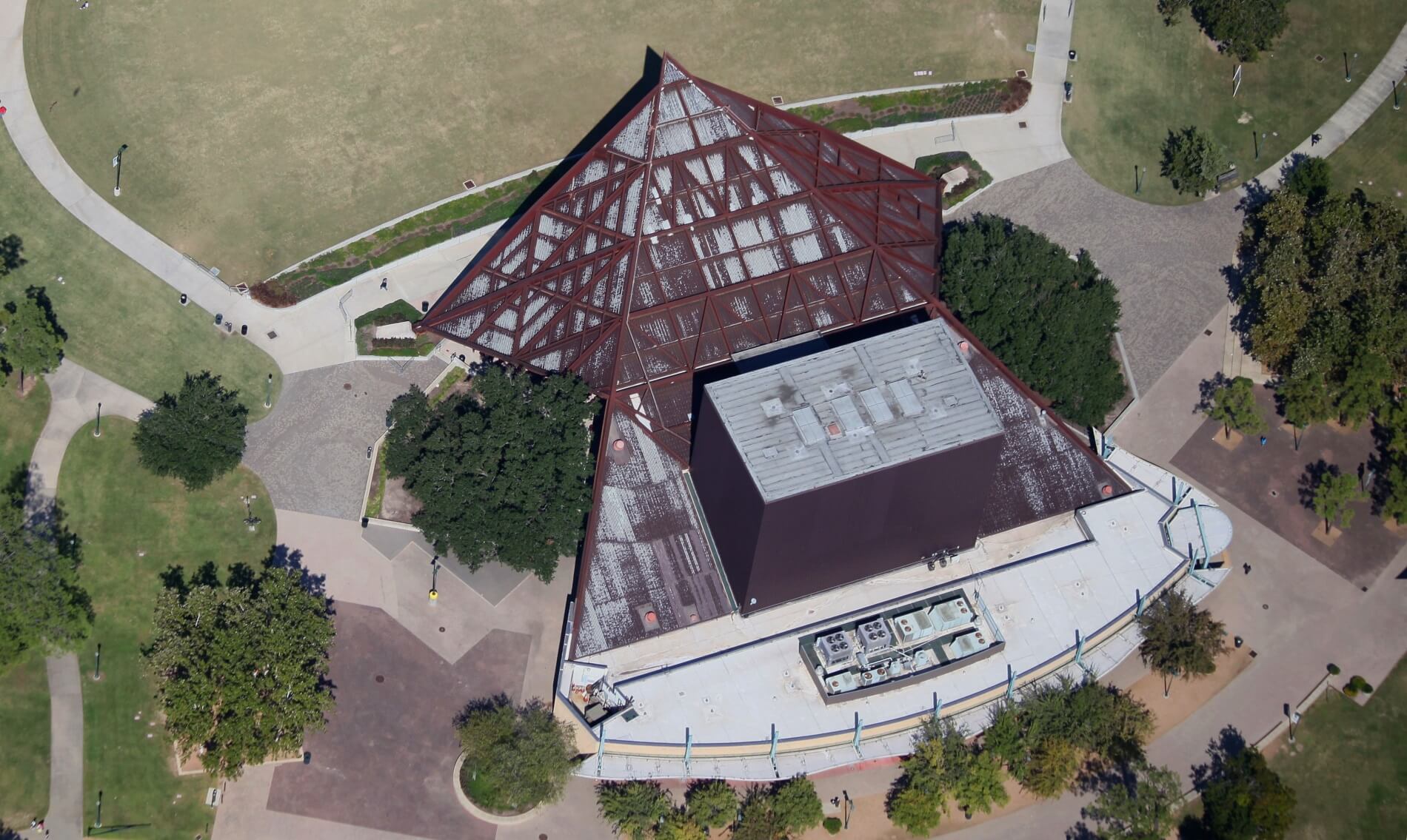