Advanced Roofing Inc. of Fort Lauderdale, Fla., runs its operation by the belief that what the customer wants, the customer gets. 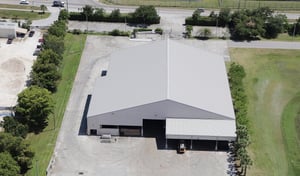 The Solid Waste Authority (SWA) in West Palm Beach, Florida, had a building with an aging and leaking R-panel metal roofing system. “It was leaking everywhere,” says Mike Scardina, the Sheet Metal Department Manager at Advanced Roofing. “The original roof looked to be over 20 years old.”

Advanced Roofing Inc. (ARI) is a commercial roofing company with nine locations, specializing in roof re-roofing, repairs and maintenance services for occupied buildings in Florida and the Caribbean. When it comes to commercial re-roofing to meet strict building standards and wind codes, Advanced Roofing has seen it all. 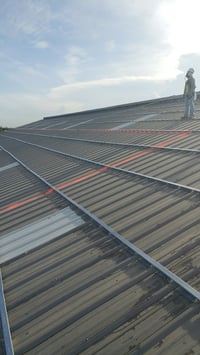 This particular SWA building was used as a dumping site for foliage collected from the community. Eventually, the leaves are moved to a compost site or a recycling facility. Roof leaks were threatening electrical components and creating many problems in a small workshop within the building. The SWA wanted a permanent solution to fix the leaks and wanted a long-lasting solution for an area where hurricane-force winds are a constant threat.

The 238T symmetrical roof system was chosen because of its extremely high uplift capacity over the open framing and ease of repair if it would ever become damaged by a future storm. This system also eliminates the need for additional edge and corner framing typically required when re-roofing an open-frame metal building like this, with existing 5-foot on-center purlin spacing. Instead of a complete tear-off of the original R-panel roof, Advanced Roofing left the roof in place and installed Roof Hugger sub-purlins every 5 feet on-center … 7,600 feet of Roof Huggers. Leaving the existing roof in place maintained the structural diaphragm that the R-panel provides to the building. The roof re-cover was completed with the 238T symmetrical standing seam roofing system from McElroy Metal in .040 aluminum. This assembly is the only Florida High-Velocity Hurricane Zone-approved aluminum structural standing seam panel system. 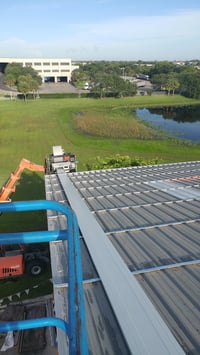 “SWA wanted their roof system engineered to the highest standard possible and in line with their goals of durability in the most extreme conditions … and that’s what we gave them,” Scardina says. “This system will last a long time and hold up under tough conditions.”

McElroy’s 238T symmetrical standing seam systems do not have male and female seams; instead, they are comprised of panels with matching left and right seams. The panels are joined with a mechanically seamed cap. The panels are non-directional and can be installed left to right, right to left or even from the center out. In addition to the installation benefits, symmetrical panels offer easy individual panel removal and replacement. Individual panels can also be re-installed, requiring only the purchase and installation of a new cap. 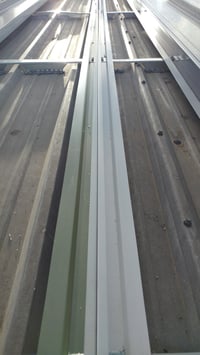 Before working on the roof, Advanced Roofing had to replace several rusting 20-foot purlins with new purlins. The roof panels for this project were .040-inch aluminum, painted Ash Gray and 16 inches wide with pencil ribs to reduce the appearance of oil canning. Seventy percent of the panels were 87 feet long and the remaining 30 percent were 100 feet long … all of the panels were run at the eave as Advanced Roofing used its in-house crane division to lift their 238T roll former into place.

To obtain HVHZ and Florida building code approval, the 238T roofing panels were installed with 100 percent 24-gauge continuous clips, meaning the clips run the entire length of each panel. The C-shaped clips are pre-installed back-to-back and run down each side of the panel and attached to the top of the Roof Huggers using two or three fasteners per side. Because of the extreme -147 psf corner pressures and the 5-foot purlin spacing, a small 22-gauge plate was added on top of the clip base over the Roof Hugger in the edge and corner zones. After three holes were drilled through the plate, clip and Roof Hugger, an AB #14 screw was used to fasten the plate and clip to the Roof Hugger in the edge and corner zones. 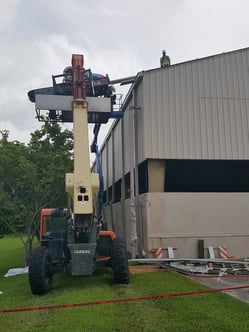 “It’s a special fastener that has a point and gets real fat where it meets the hex head,” says Tom Mahon, Sheet Metal Field Superintendent for Advanced Roofing. “It meets the uplift requirements for the area.”

Scardina and Mahon say to meet High-Velocity Hurricane Zone approval, the installation is more labor-intensive, mainly because of the time needed to pre-drill plates, but the level of added durability makes it worth the work. The symmetrical panel legs are capped and the caps are secured by a seamer.

Learn everything you need to know about commercial metal roofing.

How to Recover a Flat Roof

Quality Metal Roofs and Why They Matter