You can never have too much of a good thing, so McElroy Metal incorporated solar panels with the roof recover of a third manufacturing plant. 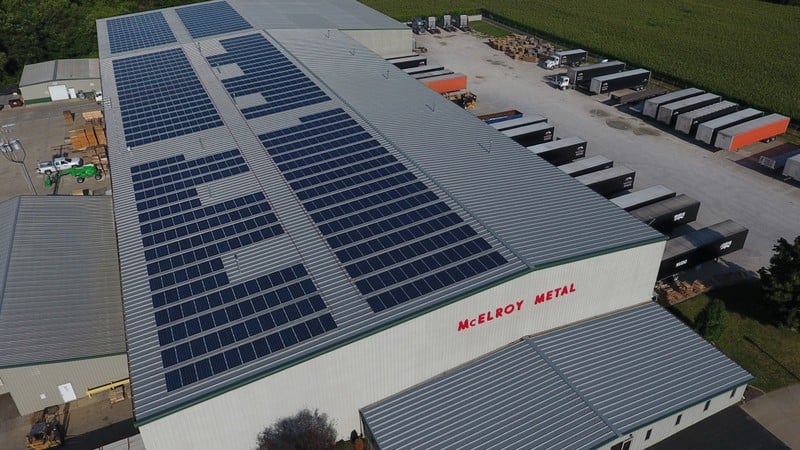 “We’re very excited about the addition of solar panels to a third manufacturing facility in conjunction with the roof recover,” says Ken Gieseke, Vice President – Marketing at McElroy Metal. “Once we did the math, and calculated the return on the investment, it simply made sense to install the solar panels. McElroy Metal remains dedicated to being an advocate for solar energy.”

The original R-panel metal roofing on the plant, constructed in the 1970s, was recovered by McElroy Metal’s 238T symmetrical standing seam roofing. Solar panels were attached to the new roofing using S-5! clamps.

“McElroy Metal has been a respected and premier metal roof and component manufacturer for three generations,” says Rob Haddock, founder, and CEO of S-5!. “Just like S-5!, they got there by setting the highest standards of quality and integrity for themselves and for their vendors. As both companies are leaders in the metal construction industry, we have had the privilege of working alongside McElroy in many venues, industry trade groups, and supply relationships now spanning almost 40 years. Not only are they a valued S-5! customer and distribution partner, but close friends, industry advocates, allies, and activists. Two premier brands, McElroy and S-5!, have both raised the bar in making metal roofs better, and together again, with the addition of solar power on their third S-5! solarized project. I am sure we both look forward to the next one.”

A variety of S-5! products were used in attaching the solar panels to the standing seam roofing, including 1,800 S-5-T clamps, specifically designed to fit profiles with a “T” shaped seam configuration, and 850 RibBracket II clamps, which are made for attaching to trapezoidal roof profiles.

In addition, 2,050 MidGrab clamps and 410 EdgeGrab clamps from the S-5! PVKIT 2.0 were also used. The PVKIT 2.0 is comprised of pre-assembled components to save time and money that requires the use of only one tool for installation. All parts are made of non-corrosive aluminum and stainless steel and installed with the module to reduce layout time.

McElroy’s 238T symmetrical standing seam system does not have male and female seams, but is comprised of panels with matching left and right seams. The panels are joined with a mechanically seamed cap. The panels are non-directional and can be installed left to right, right to left or even center to right or left. In addition to installation benefits, symmetrical panels offer easy individual panel removal and replacement for easy plenum access. Panels can even be re-installed, requiring only the purchase and installation of a new cap.

The 238T metal roofing panels were roll-formed on site, run directly onto the roof, and installed by Prairieland Roofing of Arthur, Ill.

Remove and Replace or Recover - Which type of metal roof is best?