Southwest Airlines is regarded as the world’s largest low-cost airline and operates in excess of 3,400 ­ flights every day. Needless to say, Southwest’s prominent position as a major player in the transportation industry dictates continual protection of its assets. And while admittedly, frontline employees are legendary for creating the “fun” Southwest experience, properly maintained planes are undoubtedly critical to that success. So, when Southwest needed help to fix a problematic hangar in Orlando, FL, the airline turned to metal construction industry leader McElroy Metal.

Originally constructed in 1984, the MCO Hangar has been subjected to multiple tropical storms. Hurricane Charley dealt the most direct blow in 2004. The structure, while battered, survived. However, after dealing with storm repair for more than two decades, remediation of the situation became a top priority for Southwest Airlines. Onsite personnel simply grew tired of dealing with leaks and falling insulation. During the summer of 2014, Southwest contacted McElroy Metal with an earnest desire to discuss possible renovation options to repair the integrity and daily functionality of the hangar. McElroy Metal Recover Manager, Charlie Smith, was onsite within a week of the initial call to gain an understanding of the problem and goals for the project. Southwest Airlines Senior Project Manager, Matt Coon, shared their goals with Smith:

“We need a system that can remediate the specific concerns we have on this hangar while withstanding the incredibly high uplift values of future storms and hurricanes.”

Several tropical storms had compromised parts of the existing roofing system, and repairs had been unsuccessful. Further, it was determined that the trapezoidal standing seam roofing system was under-engineered and could not meet current building codes.

While noteworthy that trapezoidal type systems have reduced uplift values compared to vertical leg panel systems, this projects’ problems were not limited to storm damage. After several unsuccessful repair efforts, the roof was coated with an elastomeric coating as a last resort in 2010.

Unfortunately, the coating application did little to stop the infiltration of water into the building. After years of moisture absorption, the original insulation became compromised and began falling into the occupied space often landing on walkways and million-dollar aircraft inside the hangar. Consequently, the situation escalated from one of a nuisance to that of public safety and inventory protection for Southwest. 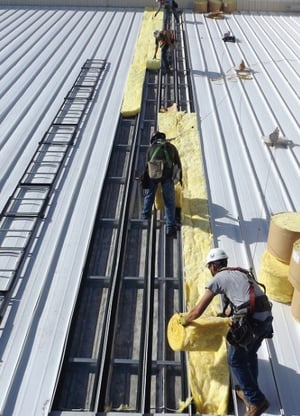 While some owners may have opted for the lower “first cost” option to cover a troubled metal roof with a membrane, the estimated 60-year life span of metal roofing and structural enhancements provided by the Roof Hugger® system made the decision easy for Southwest.

After a thorough review of the project specifics, Smith presented Southwest with five different options to recover the roof. He also offered a strong recommendation that a team of experts, including a structural engineer, be created to ensure project success. Charlie shares his insight, “Given the history of this project and the propensity for tropical storms; I felt it was important to involve a reputable structural engineer to visit the site and minimize the potential for surprises. And I’m glad we did. Our ability to bring the right people together definitely helped us exceed the owner’s expectations.”

At McElroy Metal’s request, Terry Wolfe from Force Engineering was asked to join the team. Upon a site inspection, Wolfe determined the existing purlins were an abnormally wide 5’3” OC. While the 238T roof system could meet the wind uplift requirements at that purlin spacing, he determined the building would require a significant amount of structural enhancement to meet current building codes. He also identified that in many cases the purlin connections were insufficient and recommended each purlin lap joint be reinforced. Lastly, Wolfe noted the purlins were unstable and at risk for racking which could result in total building failure. To resolve this issue, he recommended three rows of 16-gauge hat channel be attached to the bottom of the purlins from the interior of the building.

With a plan in place for the structural issues, the team moved toward selecting the metal roofing system. After reviewing multiple “Recover” options, Southwest chose to proceed with the McElroy Metal 238T vertical leg symmetrical system because it offered the best chance for success with minimal interruption to its operation. Specifically, Southwest liked the wind uplift capacity and individual panel replaceability afforded by the 238T system. Coon from Southwest shares, “We really liked the flexibility the system gave us. If we have another storm or a need to reconfigure space, replacing a few panels in the field of the roof is much easier to facilitate than with the original trapezoidal asymmetrical style roof.” 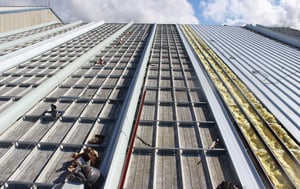 In addition to panel replaceability, the extreme uplift values offered by the 238T system were a selling point to the owner. McElroy Metal Director of Engineering, Tommy Johnson, shares, “There’s simply no comparison in uplift values between the different system types. Symmetrical vertical leg systems, like our 238T, can easily outperform their trapezoidal counterparts by 2-3 times when using continuous clips like we did on this job. That’s a big difference for every project but especially those in coastal/high wind environments.”

The owners’ goals for this project didn’t stop with a roof to survive the recurring tropical storms. They also had a desire to improve the thermal efficiency of the building. Due to the long-term water infiltration into the hangar, the insulation was in a state of disrepair and reduced functionality. It only made sense to fix the insulation problem during the “Recover” project. Ultimately, the team decided to replace the original insulation with 6 inches of un-faced insulation between the existing and new roof. This product was selected because it afforded the most continuous insulation covering at the lowest cost expenditure. It should be noted that while removing insulation is an easy task when panels are replaced, it’s a bit more challenging to accommodate during “Recover” projects. Because the initial roof remains in place, “Recover” applications require removal and replacement of insulation from inside the building.

With the panel and insulation system finalized by the team, Wolf began his job specific structural analysis. Ultimately, his recommendation included an 18-inch panel width to reduce installation costs and a 100 percent continuous clip from eave to ridge. He noted, “If we hadn’t gone with a continuous clip on this job, we would have been required to add a significant amount of additional framing. When it’s available, I pick the continuous clip every time. It’s typically cheaper than adding more structural members to the roof, and it’s a much stronger system.”

Once the project scope was finalized, five installers were invited to bid on the project. Commercial Siding & Maintenance (CSM) Houston, TX was selected as the installing contractor. While any of the five invited bidders could have performed well on the project, CSM’s history of outstanding completion on difficult jobs requiring extensive structural repairs made them a great addition to the project team.

As might be expected with a job of this scope, there were multiple challenges. Perhaps most foreboding was the need for the facility to remain operational throughout the “Recover” process. Through exceptional coordination and communication by Commercial Siding & Maintenance (CSM), schedules were developed which allowed construction crews access to the hangar during the day and aircraft maintenance personnel to utilize the same space in the overnight hours. But even more challenging than the daily schedule was the requirement to evacuate the workspace immediately in the event an aircraft required emergency repairs. CSM President Mark Wendleburg explains, “the concept of vacating a job site on a moment’s notice just isn’t normal, but my crews did a great job embracing this unique challenge. Throughout the entire project, there were only two times we had to make a quick exit. My crew’s constant efforts at clean-up and policing the area were critical to meeting this unique requirement.” 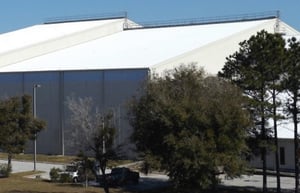 In addition to scheduling, the geometry of the building presented some further challenges. McElroy Metal Recover Manager, Smith, strongly recommended continuous one-piece panels for all roof areas, including those in excess of 145’ long. While this solution eliminated the possibility of the end laps which had been so troubling to the owner for the previous 20 years, the 70-foot eave height made it a challenge to manufacture the panels onsite and lift them to the roof. After considering several options, CSM ultimately decided to produce the panels directly onto the roofing surface. While the lower roof required only a forklift to raise the machine to the eave height, the higher roof required a crane to raise the machine to the proper height. Wendleburg shares, “Even though it took almost six weeks to gain FFA approval to use a crane at the job site, it was the best decision for everyone. It allowed us to produce the single piece panel the owner desired and my crews were able to make a more efficient install.”

In addition to the eave height concerns, there were also multiple planes and heights of the existing roof as it sloped from front to back. Smith explains, “The 238T panel was the perfect choice for this complicated project because of the flexibility it afforded the contractor. With multiple sidewall and headwall transitions at play, using a non-symmetrical panel would have been a horrible mistake. By choosing a symmetrical panel like the 238T, they gained the flexibility to start where they wanted and work their way into or out of difficult transitions.”

Ultimately, Southwest Airlines was in need of a long-term and problem free solution to protect its aircraft fleet. After conducting research and holding earnest discussions with the project team, it became obvious that all other roofing options were merely a short-term fix. Southwest Senior Project Manager Matt Coon reflects, “Given the specifics we faced on the MCO Hangar project in Orlando, FL, using the McElroy Metal 238T standing seam metal roof system as a total metal “Recover” was definitely the right choice for us.”