In 2005, Hurricane Katrina struck the Gulf Coast with a vengeance. One of the deadliest hurricanes to ever hit the United States, this Category 5 storm caused $108 billion in damages due to high winds and flooding. For weeks, about 80% of New Orleans, Louisiana was partially underwater.

One structure sustaining significant damage was the Seventh Street Wharf of the Port of New Orleans. 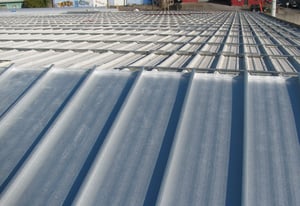 Located on the Port of New Orleans' east bank area, the two berths of the Seventh Street Wharf stretch 1,194 feet (364 meters) in length with an alongside depth of nearly 11 meters. Its facilities include a 36,000 sq. ft. (11,000 square meter) shed, 12,500 square meters of open area, and a truck loading area. While the facility had managed to get by for a number of years following the hurricane, by 2009, it was clear that the roofing had to be repaired.

To get the project underway, Mark Anino, with Linfield Hunter and Junius, contacted Terry Wolfe with Force Engineering and Charlie Smith, McElroy Metal’s Recover Manager. Port authorities were very concerned over the cost of removing and replacing the roof entirely. In addition, conducting a total roof removal and replacement would mean that the daily operations inside the wharf would potentially need to be halted for months, and further damage could be incurred due to environmental exposure caused during a total roof replacement. 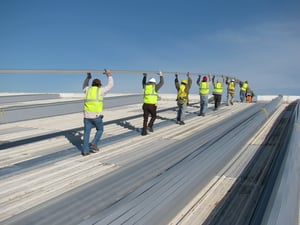 Upon close inspection of the property, and acknowledging the port authority’s cost concerns, Charlie and Terry recommended a recover using Roof Hugger®, a retrofit purlin notched to fit over the ribs of an existing metal panel to provide a platform over the roof’s existing R-panels. This would allow a new 22-gauge, 18-inch wide, 238T system to be installed. The Roof Hugger is attached through the existing roof into the purlin below, providing a direct structural attachment for the new roof.

Along with the cost savings and reduction in operational disruptions, port authorities went with the recommendation for several other reasons, including the Roof Hugger system’s ability to provide structural enhancement to the existing purlins, the minimal need for maintenance over its 30- to 50-year lifespan that a galvalume standing seam provides and the ease of replacing just one panel at a time in the 238T roof system if damage ever does occur.

“The engineers at the Port of New Orleans quickly recognized the 238T panels were the best roof system they could find for this project,” says Charlie. “We provided continuous, multi-span clips on the entire roof to significantly increase the wind uplift capacity while eliminating the need for additional framing with a system that allows for individual panel replacement anywhere on the roof and unlimited thermal movement.”

The installation team was led by John Camp, J. Reynolds & Company’s vice president and program manager. Under his guidance, the 110-foot long panels were manufactured directly onto the roof using McElroy Metal’s “Archzilla” truck. The installers could then simply carry the flexible sheets up and over the ridge of the roof.

Camp also said: “The convenience of using McElroy Metal’s Archzilla roll forming truck onsite and its ability to produce long, uninterrupted panels for the roof were other key factors in the success of the job.”

The symmetrical 238T panels utilize fixed clips that can be installed in any direction, along with a separate, machine crimped seam cover that makes repair or replacement of panels an easy task. Additionally, by using the system’s multi-span clip over regular, fixed clips, the Seventh Street Wharf was able to achieve nearly triple the wind load capacity, from 45 to 130 pounds per square foot installed over purlins 60 inches on center. Because the system uses a separate cap, and the clips sit inside an open hem at the top of the panel seam, the sealant has no contact with the clip, making the 238T panels much more water-tight at installation than traditional mechanically-seamed double lock panels.

It’s been ten years since the installation was completed on the Seventh Street Wharf, and despite the abundance of tropical storms, tropical depressions, and hurricanes that Mother Nature has thrown at the region almost every year since then, the structure’s metal-over-metal recover roofing has weathered them all. To learn more about metal roofing and recover, check out our Steel Roofing page now.