We Added Solar Panels to the Standing Seam Roof on our Plant in Sunnyvale, Texas

Taking advantage of local and federal incentives to help pay for the project, McElroy Metal added solar panels to its manufacturing plant in Sunnyvale, Texas. 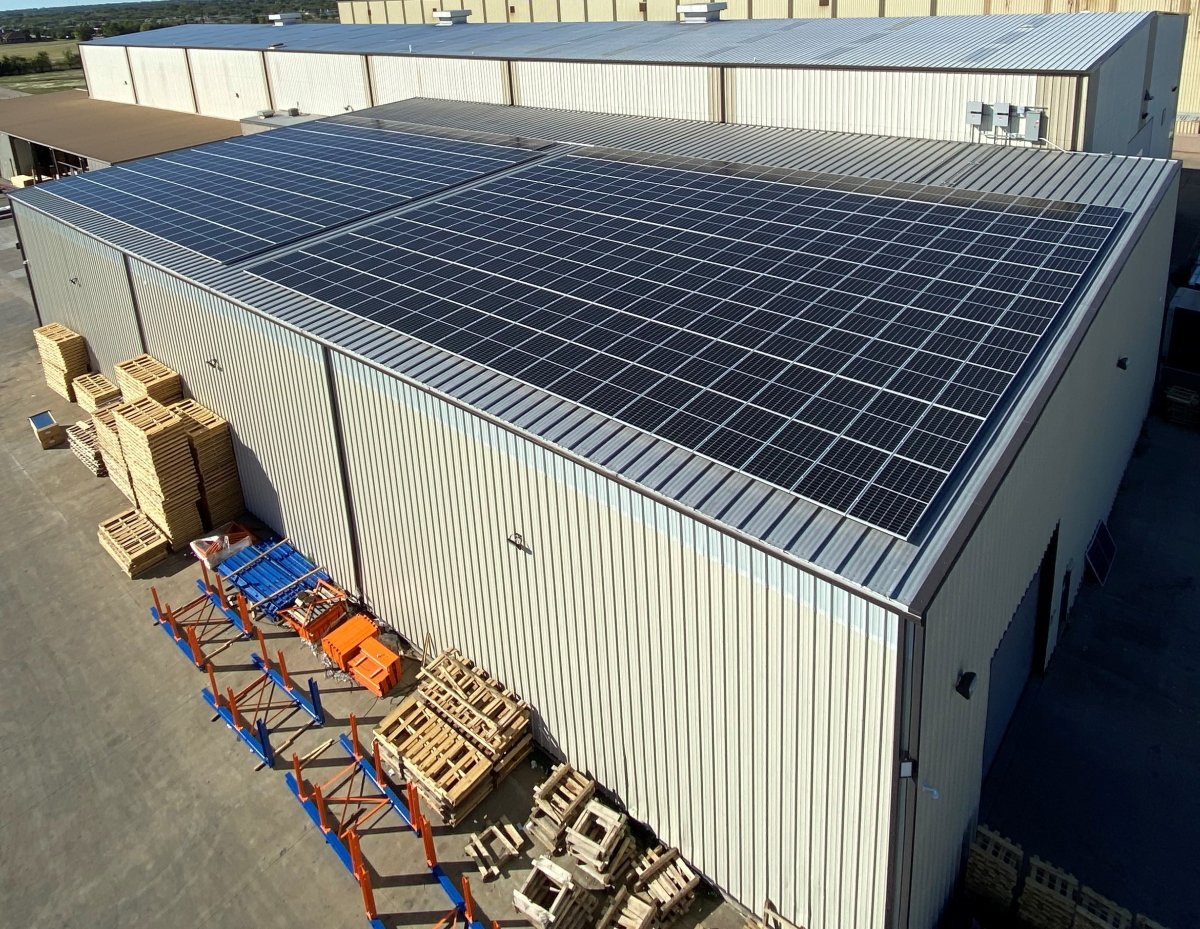 McElroy Metal, based in Bossier City, La., has now added solar panels to four of its manufacturing sites. In addition to the most recent Sunnyvale project, McElroy has completed successful solar panel installations in Peachtree, Ga., Adelanto, Calif., and Clinton, Ill.

Spier installed a 165kW grid-tied photovoltaic (PV) distributed generation (DG) rooftop system at McElroy Metal’s Sunnyvale plant. The Seraphim Energy panels were installed on a recent addition to the facility, which was topped with McElroy Metal’s 238T symmetrical standing seam panels. The panels were fastened to the standing seam roof with products from S-5!. The project contained 352 470-watt solar panels, which will produce approximately 261,574 kWh each year. The system is estimated to reduce the facility’s grid energy usage by 46 percent.

“We’re very excited about the addition of solar panels to a fourth manufacturing facility,” says Ken Gieseke, Vice President – Marketing at McElroy Metal. “Once we did the math, calculated the return on the investment, it simply made sense to install the solar panels. McElroy Metal remains dedicated to being an advocate for solar energy.”

Listen to Ken Gieseke discuss in detail the incentives available and ROI for this project.

Rangel says local and federal incentives paid for approximately 80 percent of the solar installation and that the return on investment will be about five years – for a system that is expected to last 25 years.

“McElroy Metal has been a respected and premier metal roof and component manufacturer for three generations,” says Rob Haddock, founder, and CEO of S-5!. “Just like S-5!, they got there by setting the highest standards of quality and integrity for themselves and for their vendors. As both companies are leaders in the metal construction industry, we have had the privilege of working alongside McElroy in many venues, industry trade groups, and supply relationships now spanning almost 40 years. Not only are they a valued S-5! customer and distribution partner, but close friends, industry advocates, allies, and activists. Two premier brands, McElroy and S-5!, have both raised the bar in making metal roofs better, and together again, with the addition of solar power on their fourth S-5! solarized project. I am sure we both look forward to the next one.”

McElroy’s 238T symmetrical standing seam system does not have male and female seams but is comprised of panels with matching left and right seams. The panels are joined with a mechanically seamed cap. The panels are non-directional and can be installed left to right, right to left, or even center to right or left. In addition to installation benefits, symmetrical panels offer easy individual panel removal and replacement for easy plenum access. Panels can even be re-installed, requiring only the purchase and installation of a new cap.

What is a Standing Seam Hip Roof?