How to Make Sense of Metal Roof Panel Testing

The concept of product testing originates back to 1894 when William Henry Merrill was charged with assessing the risk at the World's Fair Palace of Electricity. In order to determine and mitigate risk, Merrill found it necessary to conduct tests on various building materials.

Being the bright gentleman that he was after he completed his efforts at the World’s Fair, he decided to stay in Chicago and founded Underwriters Laboratories, often referred to as simply UL. Fast forward 125 + years and the testing of construction materials has become standard practice in the construction industry. 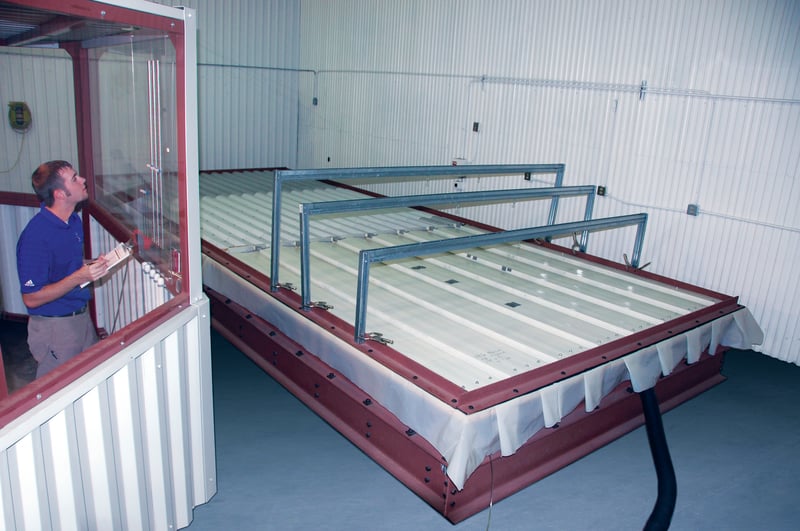 While the basics of testing used by Merrill over a century ago remain, the techniques, and products in the field of testing have evolved greatly. Thanks to design and product enhancements, testing values are reached now that were once inconceivable.

The players in the landscape have also changed. While UL may have been the founder in the testing field, they now have several competitors. And at times the field of testing can resemble the Wild West.

As mentioned earlier, there are several different entities that perform product testing. Each group can create its own standards, testing procedures, and reporting methods. Consequently, many test standards appear to duplicate each other at first glance; however, they may be vastly different.

For example, the American Society for Testing & Materials (ASTM), Underwriter Laboratories, and Factory Mutual are three popular testing entities. While they each offer their own form of uplift testing, the testing approaches vary greatly, hence the earlier reference to the Wild West.

For these reasons, it is often difficult for a consumer, specifier, or layperson to know which test standards apply for their particular project. It can be similarly difficult (and expensive) for a manufacturer to provide test results for all test standards across the various testing agencies.

Consequently, manufacturers tend to complete only the most common tests. When a manufacturer doesn’t offer a specified or requested test, it doesn’t mean that their product can’t perform to the expectations. Rather, it simply means they haven’t tested with that particular entity and the designated construction method.

Additionally, it’s important to realize that there are dozens of test standards applicable to metal roofing covering topics such as structural performance, paint, reflectivity, weather, and fire resistance. When considered in a vacuum they are perhaps all of equal importance. However, given that all of the other tests are a moot point if poor structural performance allows extreme wind pressures to blow panels off a roof, structural performance tends to be the most significant of all testing types.

There are literally hundreds of different metal roof products and they each offer different testing performance. Some panels offer middle-of-the-road results while others offer fantastic uplift pressures. A common misconception is that test values are the only piece of information necessary to determine a product's in-field performance.

The reality is that test results simply give an idea of where the product will fail. To make the test results applicable, you must also know to what limit the product will be stressed, or what loads will be applied. In order to do this, it’s imperative that you work with a qualified design professional who can accurately determine and apply wind pressures and interpret testing results for the project.

In summary, when considering panel testing, it’s important to remember that over-engineering a system to meet loads greater than what is anticipated isn’t necessary. In fact, specifying a high wind performance panel in areas that don’t experience high wind pressures, serves little purpose. Similarly, it is imperative to select or specify a superior wind performance panel in areas that do demonstrate high wind pressures. 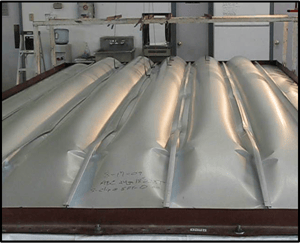 The testing entity for this test is the American Society for Testing and Materials (ASTM). ASTM publishes and maintains over 12,000 voluntary standards for materials. They do not have the authority to mandate the use of their tests; however, their standards are often adopted by entities who do have the power to mandate their use.

For metal roofing, the International Building Code (IBC) is an example of a group that has selected ASTM testing as their standard and requires adherence to their published standards.

E1592 is likely the most accepted wind uplift standard in the metal roofing industry. It is typically performed under the supervision of a professional engineer. And while not broadly required, some entities such as Miami-Dade & ICC require the testing to be performed by a third-party accredited laboratory.

ASTM E 1592 testing utilizes a test specimen of differing span lengths and conditions and then applies wind pressure to establish the maximum pressure at which the panel system can sustain before catastrophic failure. This test is generally performed over open framing, and typically with span lengths between 1’ and 5’, though some testing as wide as 8’ spans can be found.

Factory Mutual or FM Global is an insurance organization specializing in loss management. Consequently, their business model is focused on helping their customers design and build structures to resist most catastrophes. While this approach drives the initial cost of construction up, it allows FM Global to greatly reduce storm-related damage claims. FM Global has established proprietary test protocols for Wind, Fire, and Impact resistance in addition to other points of failure.

While the ASTM organization addressed earlier requires the presence of a licensed engineer during the testing process, they allow the testing to be conducted in any facility, as long as their specific test conditions are met.

Conversely FM Global requires that all testing be conducted by FM Global employees in an FM Global laboratory. As you might expect, this approach leads to longer lead times for testing activities and results in a much higher testing cost.

FM 4474 is largely similar to ASTM E1592. While both tests are performed to failure, FM 4474 utilizes increasing 15psf increments for each subsequent test. So if a metal panel passed at 135 psf, the test would then be run again with a pressure of 150 psf. If the material fails before the 150 psf value, then the product is given a 1-135 rating. Theoretically, there is no limit to FM Global ratings; however, most metal roof assemblies fail between a 1-75 rating and a 1-270 rating. 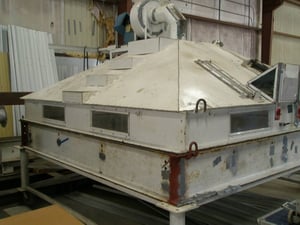 Underwriters Laboratories (commonly referred to as UL) is a privately held testing organization. Although as mentioned earlier their original foothold in testing services was for electrical systems, they have expanded their scope over the years and now offer testing services for numerous materials and products.

Where ASTM tests can be performed in any location as long as an engineer is present and FM Global requires testing to be completed in their laboratory, UL offers two options for test site location. UL allows tests to be performed either by UL at their lab, or by an independent lab with a UL representative present.

UL 580 tests are conducted at 30 psf, 60 psf, and 90 psf increments. It’s also important to note that during the 90psf stage test, the pressure oscillates between 90 psf and 105 psf. Tests that pass each phase are given a classification of Class 15, Class 30, Class 60 or Class 90. The UL 580 test stops at 90 psf with 105 psf oscillating pressure, even if the test specimen doesn’t fail at that pressure.

The UL 580 test also routinely uses a Factor of Safety of 2.0 on the test value. This means that a panel that didn’t fail at 90 psf (remember that includes oscillating pressures of 105 psf), ends up with an allowable value of 52.5 psf. In order to use a 2.0 Factor of Safety, you simply divide the final test result by 2. It’s important to note that a 52.5 psf is an insufficient pressure for many roofing applications.

To remedy the 52.5 psf allowable limit of the UL 580 test discussed above, UL introduced test UL 1897. UL 1897 is generally performed immediately after UL 580 and can be done on the same test specimen. The testing process is incredibly similar to UL 580 with the biggest difference lying in the fact that test pressures are increased beyond the 90 psf to the point of failure. Ascertaining where the roofing system fails, allows engineers to leverage the higher upper limits in their design calculations.

As mentioned earlier, the testing landscape is a bit like the Wild West, and the IBC is the sheriff overseeing it all. Consequently, if you’re working on a specification or with an owner that requires certain testing and the manufacturer you want to work with doesn’t offer it, you have a few options:

At the ripe age of 25, William Henry Merrill founded the concept of product testing. Since then products, test methods, and testing agencies have evolved. And it’s likely they will continue to do so as time marches on. In order to properly interpret and apply test results, it’s important to work with a licensed design professional.

If we can be of any help, feel free to contact us.