Aging roofing and poor details on four adjacent buildings on the Central Georgia Technical College campus in Warner Robins, Ga., got to the point they were beyond another temporary repair job. After approximately 10 years of patching the problem, the college wanted a permanent solution and eventually elected to recover the modified bitumen roofing with symmetrical standing seam panels from McElroy Metal.

Most of the roofing – a mix of modified bitumen with aluminum coating and some existing metal sections – was simply old and had weathered until it had no useful life cycle remaining. See the image below. 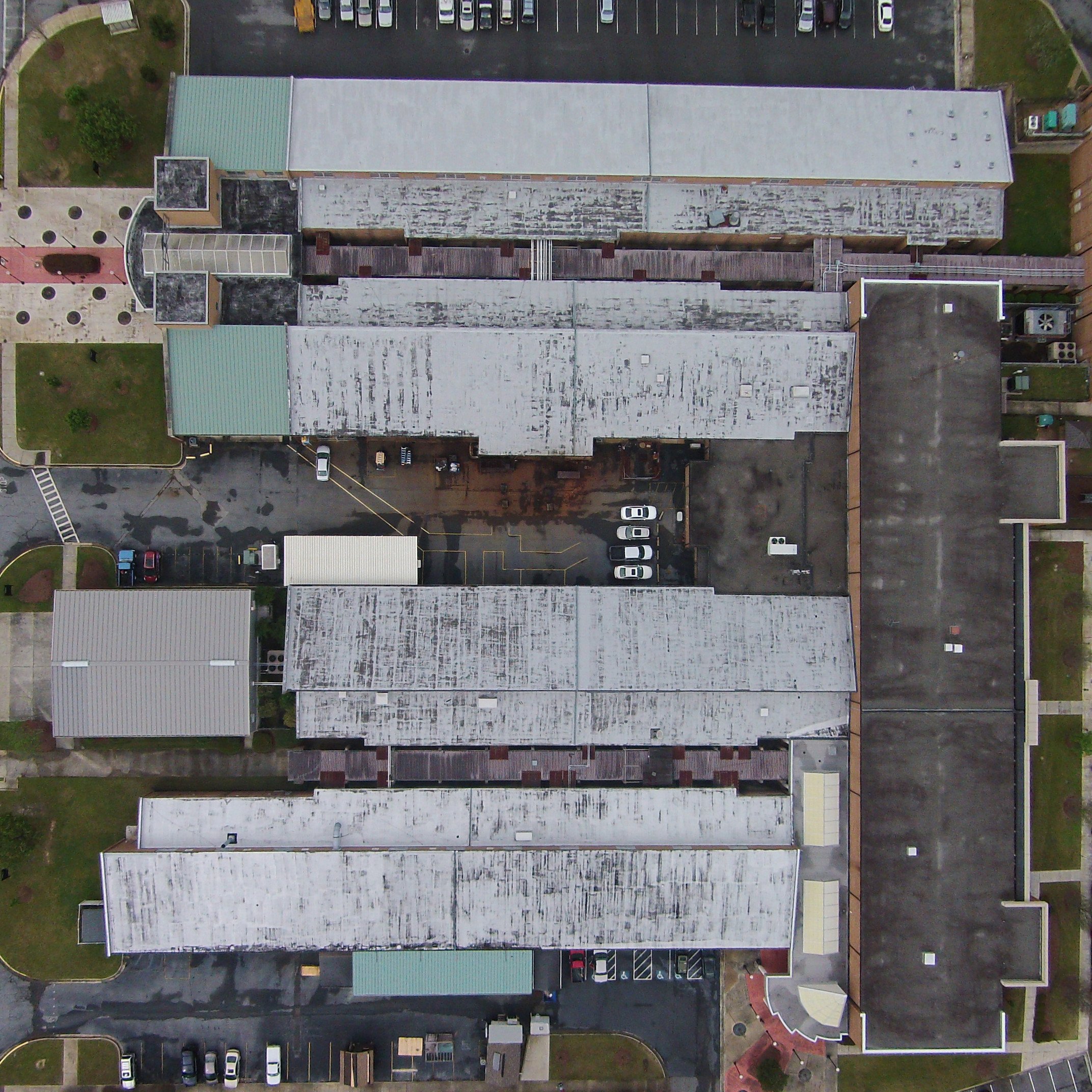 “This facility could have been successfully reroofed with any of several low-slope options including single plies and modified bitumen,” says Jody Usry of Edifice Consulting Inc. of Bryon, Ga. “The system chosen was in our client’s best interest in this particular application because the shape and slope of the building made continuous-run panels practical and cost-effective. It could also be installed over existing sections covered with modified bitumen and sections already covered with metal roofing.”

Usry says the existing roof system, due to age and workmanship, was substantially under-attached to the cementitious wood fiberboard decking. The metal option, unlike other systems, made it practical to leave the poorly attached roof systems in place and attach exclusively to the steel framing, which reduced expense, construction time, and risk exposure.

“The slope of the roof made it visible from grade and the metal roof improved the aesthetics of the campus, giving a fresher and more modern look to an otherwise rather dated complex,” Usry says. “The symmetrical panels allow for the practical modification of the roof planes for changes in projections in the future and isolated repairs in the event of damage.”

McElroy Metal’s 238T symmetrical standing seam panel is setting a new standard for performance with ease of installation, outstanding wind uplift and strength characteristics, individual panel replacement capability, and jobsite roll forming for long length panels. The symmetrical legs are topped with a mechanically seamed cap, which can be removed when the replacement of a damaged panel or panels is required.

“Also, the high amount of wall surface integrated into the overall facility made an all-inclusive system of roof and wall panels from a single source practical and attractive,” Usry says. “The system chosen facilitated the detailing of the deteriorated masonry parapet walls between the sections.”

The peak of one slope of roofing ran higher than the other, which created a wall with windows and ventilation facing the slope that didn’t run as high.

“It wasn’t an easy job for anyone involved with the project,” says Kevin Walsh, Principal and Project Manager at Azar + Walsh Architects of Macon, Ga. “The school started with a budget of about half of what they ended up spending. Once they saw what we wanted to do, they decided to find the money and do the job right.

“School was in session so everyone had to work around that. All the work was done on the roof, so no one had to get into the buildings, but you still have to be aware of any noise that could possibly interrupt what’s going on inside the buildings.”

“The biggest obstacle with this project was the coordination with McElroy and the customer in setting up a time and lay down area to run the panels off,” says Dennis McCallum, owner of McCallum Metal Works. “With the panels being over 50 feet long and the project being roughly 800 squares, the panels had to be formed on-site causing us to take up a larger footprint than normal. At the time the building was in use causing us to be in a time crunch to get the panels formed and get McElroy’s equipment off of the jobsite. McElroy’s guys did an excellent job of getting the panels run off while our guys set them in marked off locations.”

See the finished project below.

McCallum says completion of the project was “extremely smooth” with “little or no hiccups.” He said the selection of metal helped keep the project within budget.

“For the budget to work, the school kept the old roof on and we retrofitted a new one on top,” McCallum says. This gave them the desired building appeal while also fitting within the budget constraints.”

Daylighting a metal roof: An overview of natural daylighting benefits