While the materials in a metal roof, specifically steel, are conductive they do not attract lightning strikes according to the Metal Construction Association. In fact, a metal roof may actually be an advantage if a building is struck by lightning. 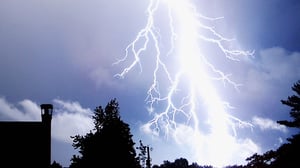 Metal Roofing and the Probability of a Lightning Strike

Essentially there is nothing anyone can do to lessen the probability of a lightning strike. Lightning strikes are however influenced by several factors.

The MCA report states that metal buildings are no more or less prone to be hit by lightning than a building using another roofing material.

The above four factors do contribute to the probability of a lightning strike though.

Metal Roofing and the Consequences of a Lightning Strike

What happens when lightning strikes a building? Lightning is a significant threat to people and property and should be taken seriously. A few things affect the seriousness of that threat including:

The MCA report states that "based on all of the available evidence, on any given building, a metal roof is no more or less likely to be struck by lightning than any other type of roofing material. In fact, a properly grounded metal roof, in accordance with the requirements of NFPA 780, will actually conduct the energy from a lightning strike over the broader area of the roof reducing the amount of heat transferred to the building and reducing the potential of damage do to fire. As an electrical conductor and a noncombustible material, the risks associated with use of a metal roof may even be a more desirable construction option."

Building owners and homeowners should consult with local experts to determine the best lightning mitigation strategies for their particular location and conditions.

If you are concerned about metal roofs and lightning, then you'll love our Ultimate Guide to Metal Roofing.

Cost Analysis of Metal vs. Shingle For a Standard Residential Roof

Why Are Black Metal Roofs So Popular?

15 Things to Know about Replacing Your Roof With Metal