A McElroy Minute with Nuchie Harris

Nuchie Harris has worked for McElroy Metal for over 34 years. Nuchie is featured in this "McElroy Minute" employee spotlight. 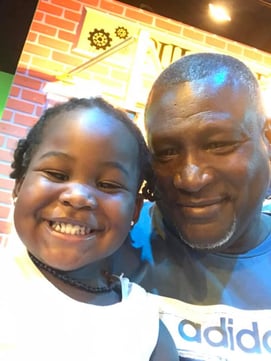 Nuchie with one of his nine grandchildren

Thirty-four years ago, a young man walked up to the receptionist desk at the McElroy Metal corporate office looking for a job and was told that we weren’t hiring and had no positions open.  As he turned to leave, Weldon Keaton saw him and asked if he was looking for a job.  Minutes later, Weldon and John Marshall met with him and, after talking for a bit, told him to be at work the following day.

For our McElroy Minute this month, we were glad to spend some time with Bossier’s own Nuchie Harris. If fate had taken Weldon Keaton on any other path that day, Nuchie Harris might have never worked at McElroy Metal. Talk about good timing for McElroy! 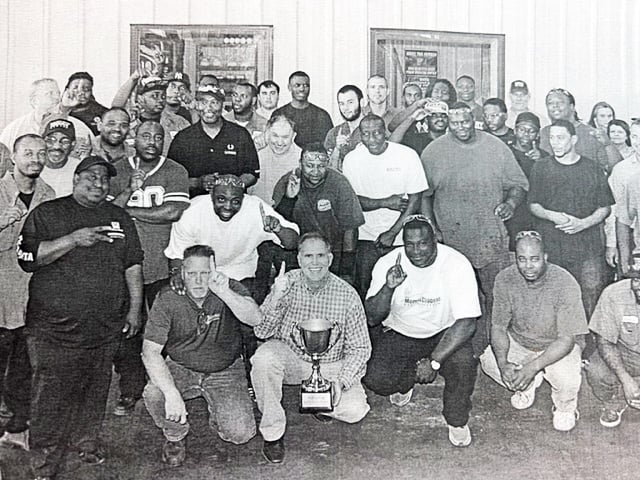 Nuchie in the front row celebrating the McElroy Cup with the Bossier City team. 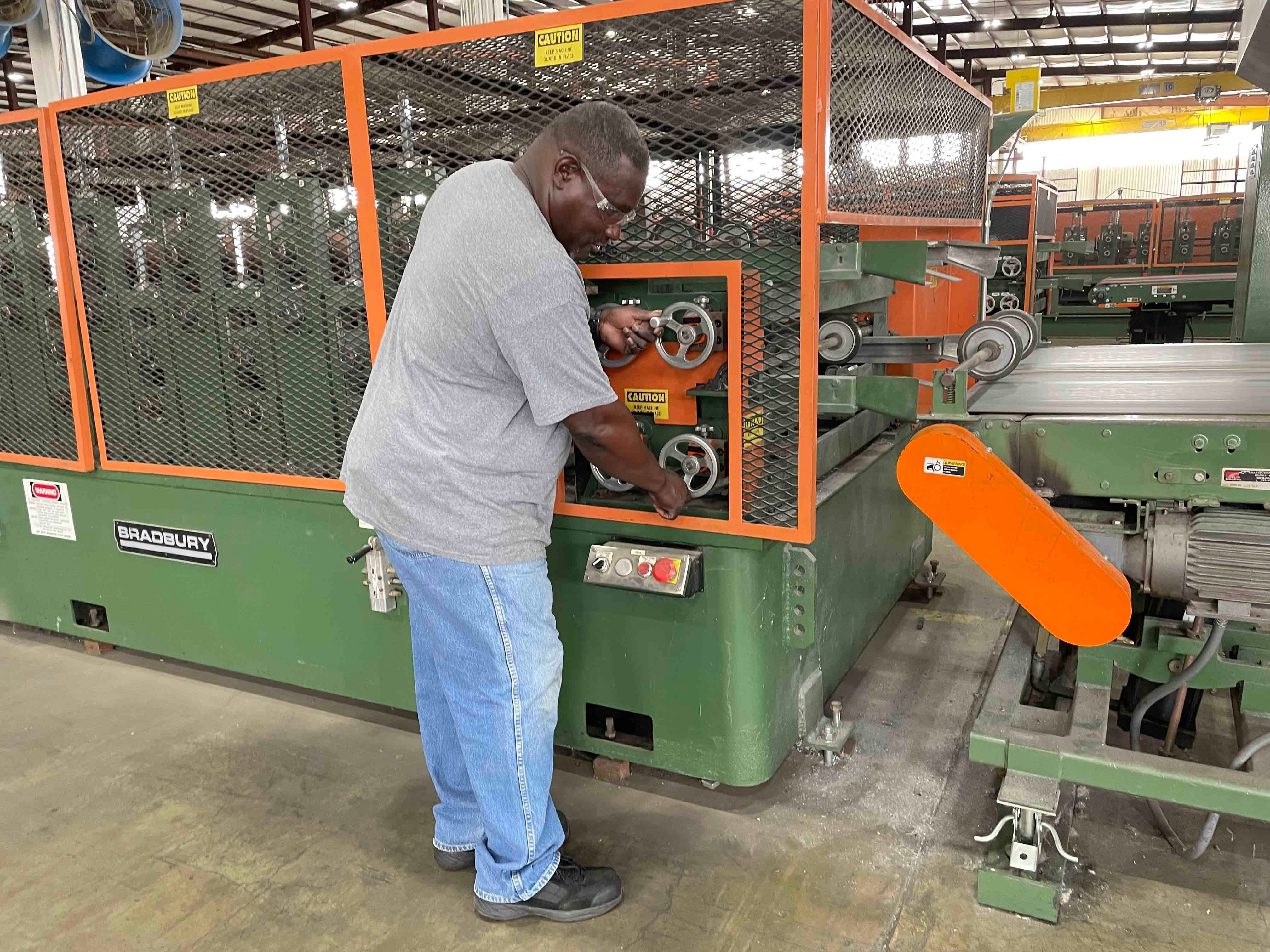 Who has been your biggest mentor at McElroy?  I’ve worked with many great guys at McElroy, but my best mentors were Alan Schaffer, Mike Scybert, and the late John Marshall Sr., the plant manager in Bossier when I started.  These guys showed me that they believed in me and inspired me to be the best man I could be at everything I did. Their belief and confidence have been the driving force in everything I’ve accomplished. 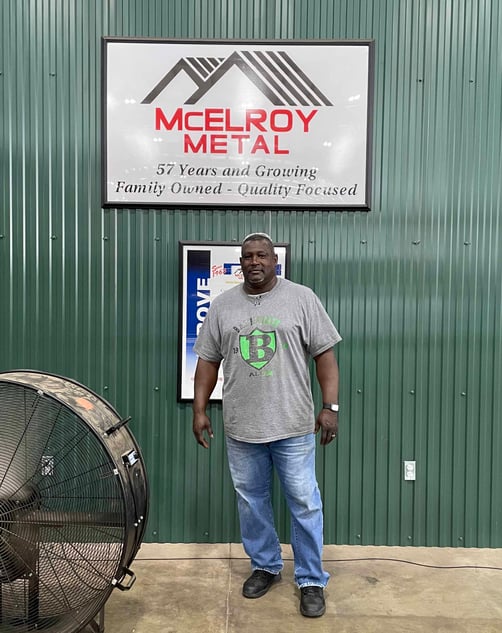 If you could switch jobs with anyone else in the company, who would it be and why?  I’d probably try to be an Operations Manager. We do a really good job of promoting within, but a lot of employees miss out on opportunities because they are either unaware or haven’t applied themselves enough to gain consideration.  I’d like a chance to change that.

What has been the biggest challenge in your career?   In leadership, we invest a lot of time and energy with our people and take them under our wing. It’s frustrating to see them leave because they think the grass is greener elsewhere.

What’s the best part of working at McElroy Metal?  There are lots of good things about working at McElroy Metal.  If there weren’t, I wouldn’t have stayed here for 34 years.  The stability, benefits, and environment are all excellent here. You just don’t find those qualities at other employers. I also really enjoy the fact that I get to work with good family-oriented people. The people aspect is especially important since we often spend more time with people here than with our family at home.

What are your Hobbies? If I’m not at work or with my family, you can find me playing softball or fishing. I’ve been playing softball for 30+ years. I was a baseball player in high school, but after school learned that it was easier to find opportunities to play softball than baseball, so I gave it a try and have been playing ever since. I still play on a senior traveling team (for guys 50 and over). We travel around the country every weekend to play in tournaments in places like Georgia, Florida, and Las Vegas. I’m planning to play for a few more years. 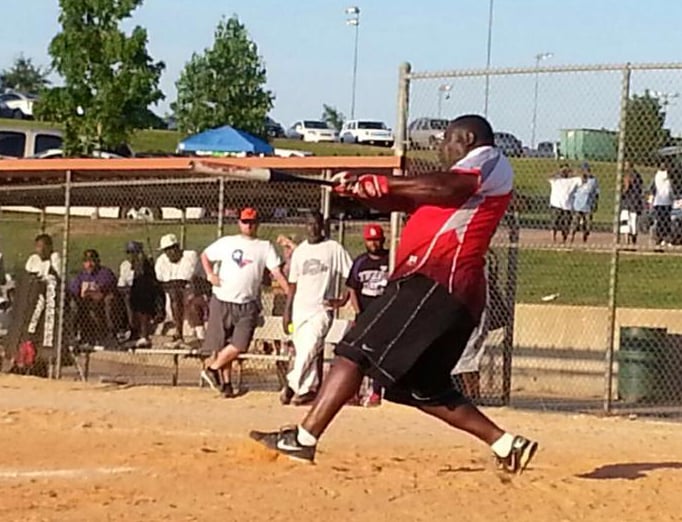 Nuchie's long-ball ability on the softball field is legendary!

Crappie fishing is another way I like to relax in my free time. Every chance I get, I’m in a boat on the lake with a fishing pole in my hand using my favorite bait, a salt, and pepper jig.  When I catch crappie, I keep them and pan-fry them, but I catch and release all the other types. The largest fish I caught was a 40-pound Gaspergou fish. My brother and I were fishing that day, and the fish drug the boat around for about 20 minutes, but we just kept after it. It was so big that it took both of us to get it in the boat.

What’s something not many people know about you?  My real first name isn’t Nuchie; it’s Cornelious. Years ago, my cousin started calling me Nuchie Baby. Thankfully I lost the baby part, but Nuchie stuck and is what everyone still calls me to this day.

If you had to eat one food every day for the rest of your life, what would it be?  I think that would have to be smothered hamburger steak with rice and gravy. Some places around here have it on the menu, but I prefer to make it at home.

Where are you happiest?  I’m definitely the happiest when I’m at home with my family and grand kids. I am the baby of 8 kids, and I have a large family, so there is always lots of family around. All nine of my grand kids (ages 2-13) live in the Bossier City area, so I spend a lot of time with them. Some are into sports, and I spend a lot of time at their games. When we’re not at sporting events, I like to take them to the Field of Dreams Park, where they have zip lines and all sorts of other things for them to do. And the younger ones always like to take Papa to Chuck E Cheese and break me. We have fun, and their smiles are worth it! 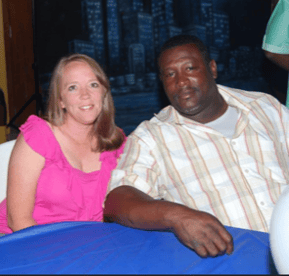 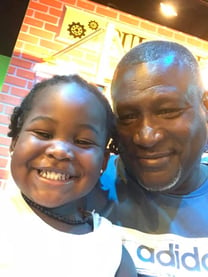 Nuchie with his wife, Becky and grandchildren. 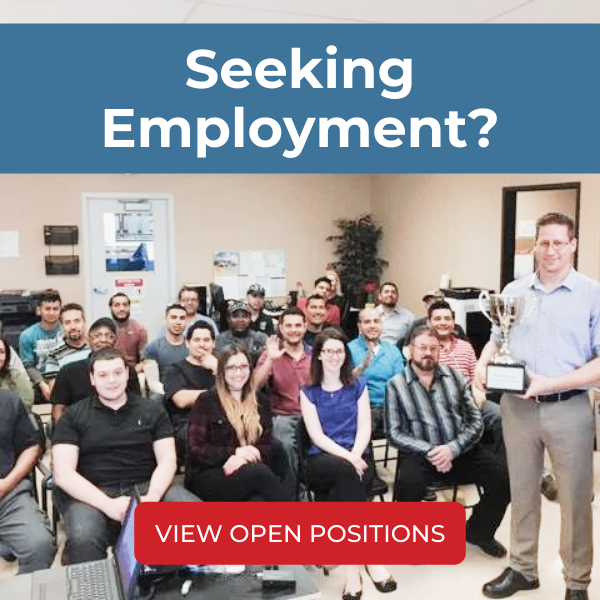